For Panamanians, the name Taboga is closely linked to art, music, and literature. You can see the silhouette of this beautiful island from Panama City, and now getting there is much less complicated. Its coastal perimeter is about 8 miles, and is located in the Gulf of Panama on the Pacific Ocean.

What many do not know is that Taboga has historically been the center of many momentous events, and its narrow streets and ancient buildings have a tradition that has been crucial not only for Panamanians, but for citizens of other countries. 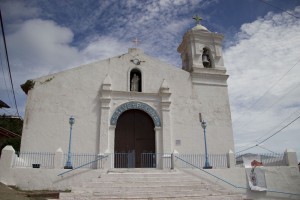 Taboga Island was discovered by Vasco Nunez de Balboa, the famous discoverer of the South Sea (Pacific Ocean) in 1513. The island was founded by Father Hernando de Luque, on June 29, 1524 and the main town named after St. Peter (San Pedro).

The town of Taboga, was founded around 1549 with a population of slaves. The island has many family names that recall its history. Among them are Francisco Pizarro (the Spanish conquistador), and La Subida de Coto.

The pirate Morgan brought his buccaneers and galleons to make rest stops on the island during their voyages, however in most cases the men simply drank all the wine on the island!

The always serene Taboga housed a US Army military base during the Second World War, located on top of Cerro de la Cruz, which represented a great economic boost given number of soldiers stationed there.

Years after its discovery the island was renamed Taboga which means “abundant fish” in indigenous language. Today the famous island off the southern coast of Panama bears the nickname “Island of Flowers” for the colorful flowers and abundant wildlife around the island.

From 1885 onward, Taboga began to realize the benefits derived from the construction of the French canal. In the same year, a Medical Center was built on a hill with excellent view of the sea. The Center had a capacity for 25 patients.

One of the most distinguished patients was the famous French painter Paul Gauguin, who was recovering from malaria for several weeks. He then departed on a trip to the islands of the South Pacific, where he painted many of his best works.

The church of San Pedro is confirmed as the second oldest church in Latin America.  The inside of the church is incredible, with ancient carvings and scriptures on the walls, beautiful decorations, and ashes of pirates inside the walls.

The island also has the famous Cementerio do Taboga (Cemetery of Taboga).  Dating back hundreds of years, the cemetery has an amazing history of its own and hosts many ancient and decorative headstones and graves.

Taboga is located just 8 miles from Panama City, and only is 30 minutes away with Taboga Express Fast Ferry on our new, modern and comfortable catamaran vessel.  The island now hosts 6 restaurants, 6 hotels, 3 beautiful beaches, and coming very soon is a new, 12-line Zipline!

Please send us an email and will get back to you.